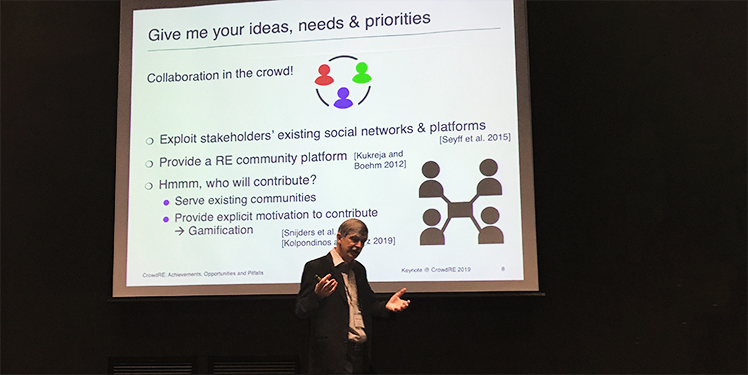 A groundbreaking keynote on Crowd-based Requirements Engineering (CrowdRE) was recently held by the renowned Prof. Dr. Martin Glinz, and we are excited to be able to share a video recording of his 39-minute talk with you.

Fraunhofer IESE introduced CrowdRE in 2015 and continues to be a pioneer in this subdiscipline of Requirements Engineering (RE). We perform CrowdRE for clients from industry and are leading the research in this field. However, we also place great value on the collaboration with other scholars on CrowdRE. Among other things, we have co-organized every edition of the International CrowdRE Workshop. Its latest edition was held on 24 September 2019 on Jeju Island, South Korea, collocated with the 27th IEEE International Requirements Engineering Conference (RE’19). The workshop involved a keynote, a brief creativity session, and six strong paper contributions, among which Fraunhofer IESE explored the implications of the GDPR on collecting, storing, and analyzing feedback in CrowdRE. However, in this post, we would like to focus on the keynote.

The keynote was set up to provide a guided tour through the landscape of CrowdRE, highlighting achievements, opportunities and pitfalls of CrowdRE. Among its achievements, Glinz acknowledged the definitions on CrowdRE that were introduced by Fraunhofer IESE in 2015 and 2017, before suggesting a new, broader definition, with CrowdRE “encompassing all approaches that engage a crowd of mostly unknown people for performing RE tasks or providing requirements-relevant information”. Fraunhofer IESE not only supports this extended definition; we are delighted about the recognition that this discipline with RE receives and the aspects that we can now consider integral parts of CrowdRE!

A second major contribution by Glinz is his view on the opportunities that CrowdRE has, and the pitfalls that should be avoided. Chances that CrowdRE should consider taking include considering activities such as traditional crowdsourced micro-tasks for the purpose of RE, the potential that open-source development brings, and the potential contribution of CrowdRE to complex systems. At the same time, CrowdRE should be careful when interpreting crowdsourced data, which may lead to accepting wrong solution ideas or adding too many features (often known as “featuritis” or “bloatware”), a bias towards the loudest, most dominant members of the crowd, the representativeness of the user feedback, and the degree of motivation versus fatigue the crowd experiences towards providing feedback. His words should be taken to heart by any researcher or practitioner in the field of CrowdRE, not in the least Fraunhofer IESE!

> See the VIDEO of the CrowdRE’19 keynote by Prof. Dr. Martin Glinz

Martin Glinz is an emeritus professor of Informatics at the RE Research Group of the University of Zurich, Switzerland. He has held this position since 1993, prior to which he had studied mathematics and computer science at the RWTH Aachen University in Germany, and gathered 10 years of experience in industry. He is a renowned researcher in the domain of Requirements Engineering (RE), with authoritative works on modeling, validation, quality and software engineering education, which include proposing today’s generally accepted notion of what is considered a non-functional requirement. As a respected member in this field, he among other things is on the editorial board of the RE journal, the chair of the steering committee for the IEEE International Conference on RE as well as the general co-chair of the RE’20 conference, and chair council of the International Requirements Engineering Board (IREB), author of the glossary for IREB’s Certified Professional for Requirements Engineering – Foundation Level (CPRE-FL) glossary. His works on CrowdRE include his involvement with the EU Horizon 2020 project “SUPERSEDE” on user feedback, and his collaboration with Dr. Emitzá Guzmán on the analysis of tweets for RE. 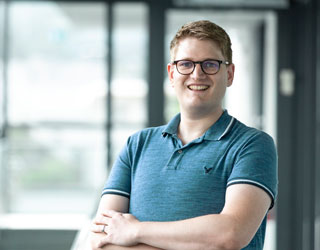